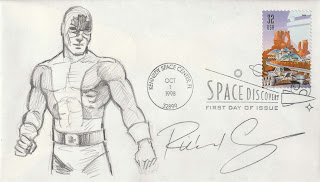 Captain Canuck by Richard Comely - Space Discovery FDC
2022-07-09 Garden State Comic Fest, Morristown, NJ
I have not been to a comic show/con since NYCC last October. When I read that Richard Comely, creator of Captain Canuck was going to be at the show, I knew I was going to go and obtain an autograph
Captain Canuck had been honored on a Canadian stamp in 2002, along with Superman, Nelvana, Johnny Canuck and Fleur deLys. When I handed Mr Comely the cover for his signature he mentioned that there was too little space to draw a proper image. Although I did not come to the show planning on obtaining a sketch, I did bring a few covers with me. We choose the Space Discoveries FDC from 1998, as the stamp had a science fiction feel to it 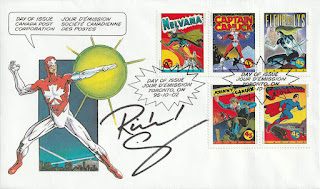 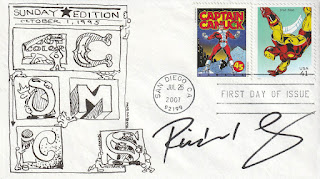 Iron Man 2007 FDC postmarked with a Captain Canuck stamp, signed by Richard Comely
It was a pleasure to meet Mr Comely and had a nice conversation with him and his table mate - Fadi Hakim. I always enjoy going to a convention, where the artists are accessible and friendly to work with
Posted by RRobinson at 2:38 PM No comments: 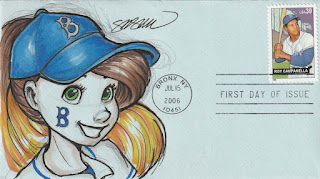 2021.10.08 NY Comic Con
Konni Mackenzie by S. Preston
It's been a while since I have had the chance to post a new sketch.
I was the fortune to attend NY Comic Con again. This year I came across the booth of S. Preston, a fantastic artist who creates minimalist stadium art and ballpark princesses. He was kind enough to draw his new original character that he hopes will help promote baseball to the girls who go to the game with their dads.
I am sure she will be affectionally called Konni Mac!
Check out his work, my wife loved this and that speaks volumes, Thanks Preston
S. Preston
Posted by RRobinson at 7:44 PM No comments: 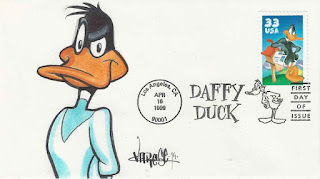 Jose Varese's passion for art and design can be traced back to his childhood, when he was repeatedly grounded for drawing on his bedroom wall. Eventually they discovered his potential and encouraged his creativeness

Jose continued developing his skills as an illustrator, winning regional and national competitions and collaborating with local Miami artists

2009, Jose partnered with Creature Entertainment as their art director and lead artist for titles The Gun and Ravenous. Jose has also worked on projects such as The Mighty Titan, Soulfire - the Dying and the Light, Soulfire - Hope, the Faro Chronicles, Light Earth, Alpha, The Beach Chronicles, Red Sonja and Vampirella

Amidst his prints of gorgeous women and superheros, Jose eyes lit up when he saw the Daffy Duck stamp. He asked if he could provide a drawing for it and produced a proud Duck Dodgers in the 24 1/2 Century. A favorite of both of ours.
Posted by RRobinson at 5:49 PM No comments: 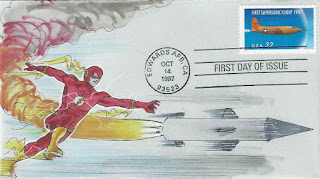 
Peter clinton is a comic book artist from London, England, who has worked for Cloudscape Comics, Upper Deck Entertainment and other small press publishers. Peter is currently a third year student at the Kubert School

peter came up with the idea of the Flash having a race with a rocket, drawn on a Bell X-1 first day cover to honor the breaking of the sound barrier by Chuck Yeager, in 1947
Posted by RRobinson at 5:53 PM No comments: 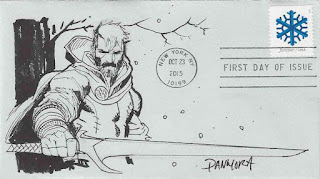 
Dan Mora has worked for Boom! Studios on Hexed, Klaus, Power Rangers and Buffy the Vampire Slayer. He has also illustrated covers for Marvel and DC comics

Aftr graduating from the University of Costa Rica, Mora focused on painting. He soon turned his attention to fantasy and science fiction. Along with friends from University, they created the comic magazine El Zarpe, in 2008. They published 9 editions. Mora would have comics published in the magazine SoHo (2013) and Buensalvaje (2014) 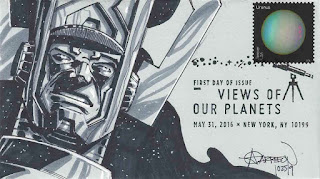 Posted by RRobinson at 5:42 PM No comments: 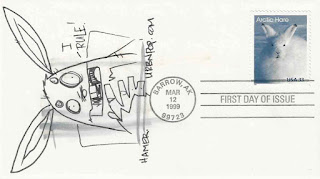 Under the guise of UrbanPop, Chris pays tribute to street art and urban decay while putting on a humorous twist on his world, while working for companies that include Spotify, AMC, Jack Daniels, Mellow Mushroom, Topps, Upperdeck, Cryptozoic and Scout Comics

His creation Byron the One Eye Monster has been the mascot of UrbanPop since the beginning. He is a friendly loving one eye monster, who gets into mischief with his friends Oswald and Paxton. Bryons stories are published by Scout Comics and can be seen on shirts, street art, toys, buttons and on season 5 of AMC's Walking Dead 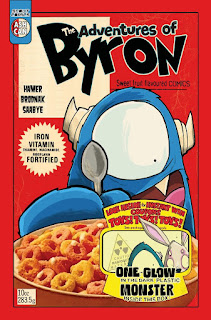 The Adventures of Byron are all age self-contained stories featuring Byron, Oswald an Paxton, three monsters with different personalities who rely on each other no matter what harebrained idea each has

Scout Comics
Posted by RRobinson at 5:30 PM No comments: 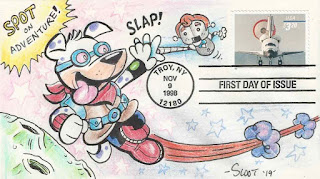 Scoot is a graphic designer and illustrator for Toledo's Allied Learning Labs, turning his talents to comics by night. As quoted in Toledo Parent "I have always been into all ages books and stories. I was always coming up with silly characters. When I draw all-ages cartoony comics, it's almost like I become a 7-year old kid again, and that's a good feeling."

Scoot draws a comic with Franco on Action Labs comic "Spot on Adventure" a not-so-serious exploits of a superhero canine and his robot partner, available on Comixology. Join the action adventurer Spot as he em-barks on the mission of a lifetime! Saddled with a brand new partner he never wanted, Golly-G the robot that wants to be real. Spot is hired to rescue a princess from the clutches of the bad guys...tune in for more action adventure! 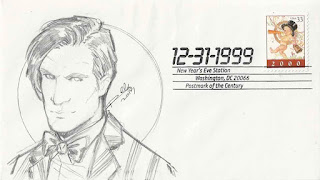 In 2013 she started an international collaboration with several studios including N.A.S. Studios, Be Amazing Studios, Fractured Entertainment.. 2014-2015 she started working as a series drafter for Zenescope Entertainment on "Robyn Hood Ongoing" and Margins Publishing for projects that included "Vampire Emmy and the Garbage Girl"and "Anonymously Yours".

Roberta
Posted by RRobinson at 5:00 PM No comments: 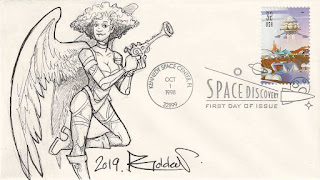 
Raya Golden, graduate of the Academy of Art University focuses on traditional and digital illustration. Her work includes the graphic novel Starport, based on an unused TV pilot written by George R.R. Martin, gaming cards for Fantasy Flight games, wrap around designs for Polar bottles and miniature concept designs for Dark Sword Miniatures. Her book The Meathouse Man, based moon a short story by George R.R. Martin, was nominated for a 2014 Hugo Award for best graphic novel


One of the first tables I reached at NYCC was Raya's, as she was setting up. We had a nice discussion about her work, which brought up the sketch. We agreed upon Raya creating whatever she felt like drawing, using the science fiction theme. She did not disappoint.

Raya Golden
Posted by RRobinson at 4:00 PM No comments: 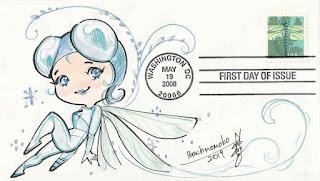 Peach has also provided official art for the 2017 movie "Cynthia" for Girls and Corpses, and "Meatball machine" directed by Nishimura

Going to NYCC I had planned to request a sketch from Peach, although I had little direction as to what to obtain. Her style can vary from Manga superhero to very elegant and detailed. Through her interpreter we decided on a "cute" dragonfly, which is awesome! 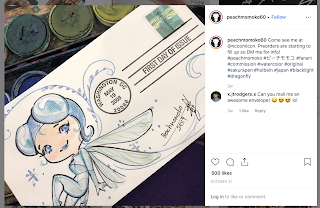 History of Peach
Instagram
Posted by RRobinson at 5:00 PM No comments: 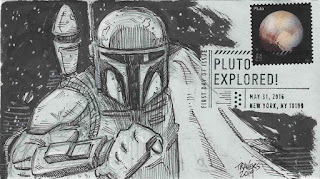 Tom Travers is the creator of the fantasy/action hero Battle Skull. His 1980/90s childhood fueled his creative fire, along with an unwavering desire to create unique, entertaining characters, stories and worlds. Tom is looking forward to self-publishing a Battle Skull comic book

RRobinson
I have been a collector as far back as I can remember. Stamps, covers, autographs, baseball cards, comic books, coins, political buttons, sports memorabilia, space stamps and covers, and the list goes on. This blog was set up to be able to share a small part of my collection with anyone who shares the interest.